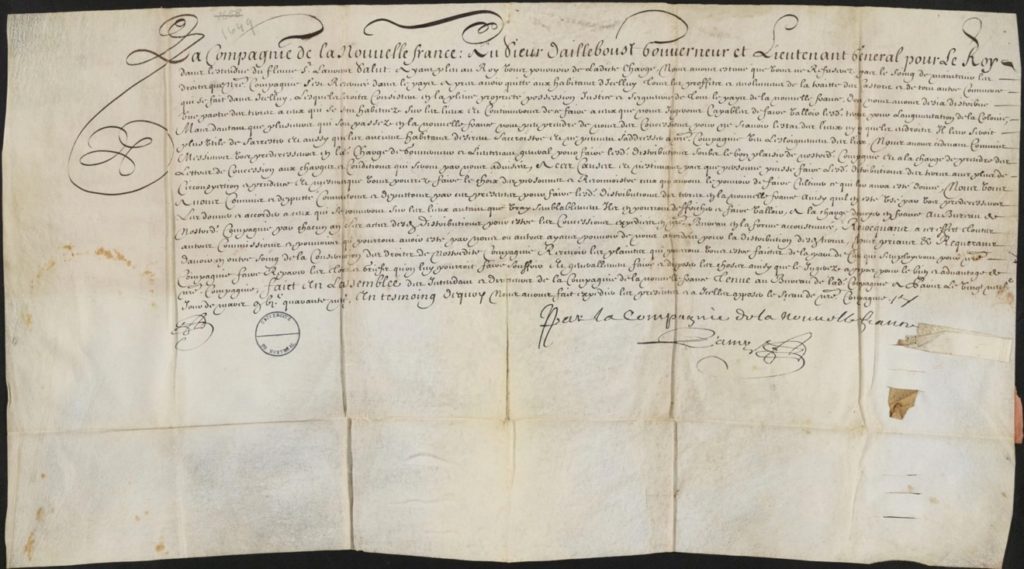 Over the course of its history, the colony of New France covered large portions of North America. Its main center was in the city of Québec, which was then the capital of Canada, but the secondary administrations of Louisiana, Acadia, Newfoundland and Isle Royale (today’s Cape Breton Island) benefited from a broad autonomy and generated their own documentation. Today, New France’s archives are scattered in many government (national, provincial and municipal), religious and private (libraries, museums) archive centers, mainly in Canada, the United States and France, but also elsewhere in Europe and America. This wide dispersion of archives makes it particularly difficult to obtain a global portrait of the colonial regime and the mechanisms underlying the production and circulation of its documentation. New France’s documentary corpus is also characterized by its great material diversity, being composed of administrative and private correspondences, as well as judicial, notarial, religious, cartographic, linguistic and literary works, all types of sources that require specific expertise to be decrypted and analyzed.

Nouvelle-France numérique is a project that seeks to overcome these problems and revolutionize research on New France by creating the means for pooling expertise and documentation and thus making New France’s corpora easier to access, to search and to process by AI.

Since its early days, in 2018, Nouvelle-France numérique has been associated with the READ-Coop and the development of Transkribus. The project relies on Transkribus to share the documents provided by our partner archive centers, to transcribe them and to mark up the metadata following TEI standards.

With the help of our collaborators, we have been able to transcribe different types of documents and to train several HTR models adapted to modern French (17th and 18th centuries) and to different styles of handwritings. These models have allowed us to transcribe, to date, tens of thousands of pages of different types of documents, achieving Character Error Rate (CER) below 5%, some of which have been made accessible to every users in Transkribus (see model “New France 17th-18th Century”). In the coming years, we plan to improve these models and make them both more efficient and flexible, in order to accommodate a wider variety of writing styles. In addition, because of the central role played by Indigenous peoples in the history of New France, the project also aims at developing recognition models adapted to different indigenous languages.

Nouvelle-France numérique benefits from financial support from Canadian Social Sciences and Humanities Research Council, through the “Partnership Development” program. The website can be consulted at the following address: www.nouvellefrancenumerique.info (in French).