Iurisprudentia – A Journey through Time 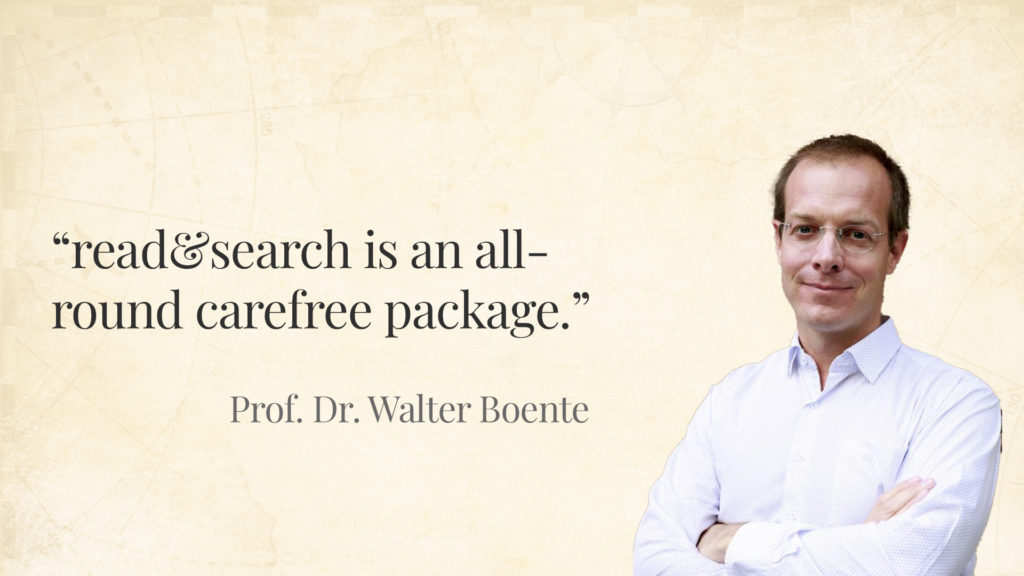 Legal history is a research field that focuses on the evolution of legal systems, and the reasons behind the implementation of different laws. Luckily for legal historians, law is also a field that is known for its thorough documentation. That means there is a wealth of legal documentation available for researchers, stretching back several hundred years.

However, accessing this (mostly paper) documentation isn’t always easy. Firstly, documentation is often housed across several archives in different locations, and a researcher must travel personally to the archive in order to view the documents. Even the documents that have already been digitised are spread out across the internet and often hidden behind paywalls.

At the University of Zurich , a group of researchers decided it was time to rectify this problem. Prof. Dr. Walter Boente — chair for private law at the university — and his team decided to produce a digital corpus of legal texts and publish it online using the read&search platform. By doing so, they have created one of the largest digital collections of historical legal documents available on the internet.

Of course, digitising every document out there in one go would be a rather large project, particularly as the team had not embarked on a project of this type before. Instead, they decided to begin with a few smaller sample collections, such as papers written by lawyers of historical importance or documents concerning a particular law.

The starting point was to bring documents stored digitally in other archives and libraries over to the new platform. In addition, many documents needed to be digitised for the first time, and the team was lucky to have the support of many institutions, who prepared their documents ready for use with Transkribus.

Once the documents were accessible on Iurisprudentia, they were then transcribed using the Transkribus platform. The team started by using the public models offered by Transkribus to automatically transcribe the historical documents. But with the help of the crowd, more and more documents were transcribed or corrected manually. Using the resulting Ground Truth, the team retrained the general models and thereby adopted them to the needs of the project.

Another key goal for the Iurisprudentia team was accessibility. After all, it was the lack of access to legal historical documents that prompted the team to start the project in the first place. The aim was to have all the transcribed documents available in one place, without a pay wall, and for users to be able to quickly search entire collections for specific information.

After looking at several options, the team decided to use the read&search platform to publish the corpus. Their main reason was the ease of use that read&search offered. Documents can be uploaded straight from Transkribus, as well as any tags and metadata that have been implemented. The team therefore could rely on the infrastructure set up centrally by READ-COOP. For the Iursprudentia team, this remains one of the biggest benefits.

“The read&search platform is an all-round carefree package,” Professor Boente explained. “Every few weeks I see new tools popping up that seem to offer better solutions than read&search. That is sometimes very tempting. Nevertheless, it would take a lot of investment and further development to be able to use these tools productively.”

The Iurisprudentia platform currently stores 22 different collections of documents, spanning hundreds of years of legal history. Although the platform was originally intended just for documents concerning Swiss, German and Austrian law, several international collections have now been launched. The first of these, a Polish-language collection on civil law, has already been added and there are other collaborations in the pipeline.

It has been several years since the project began, but Professor Boente is still very happy with their decision to use read&search for the project. “To date, I have not found a better offer than read&search. My advice is therefore to concentrate on the content of your project. If, contrary to expectations, you find something better in the future, you can continue to use all of your data stored with read&search—without converting it. It doesn’t get any more sustainable than that!”