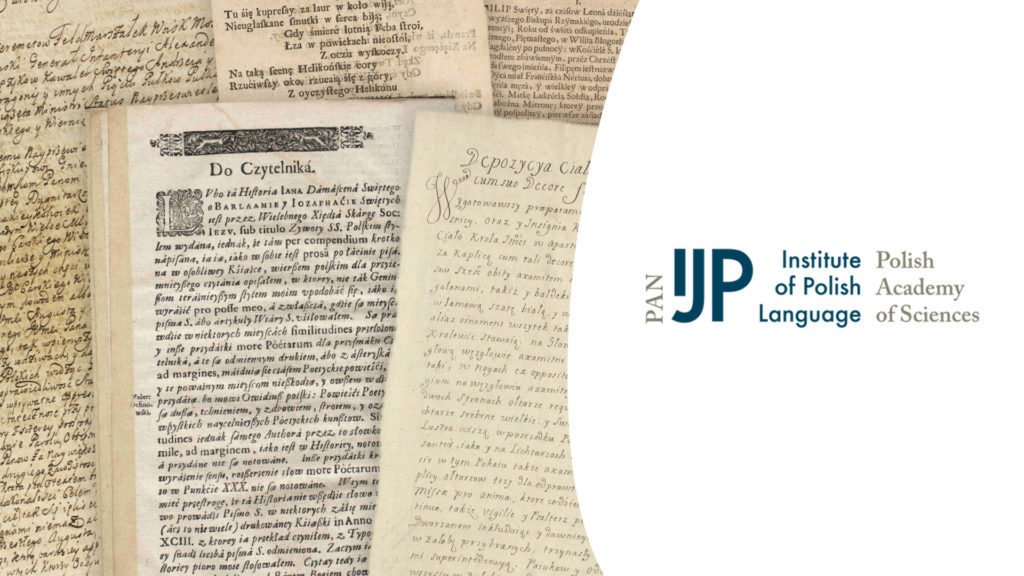 Languages evolve over time: even first-year linguistics students could tell you that. But understanding how they evolve is slighty more challenging.

At the Institute of Polish Language – Polish Academy of Sciences, a team of researchers is trying to gather insights into the evolution of the Polish language. They are creating a digital linguistic corpus of Polish texts from the 17th and 18th centuries, to make it easier to analayse the language used at this time. And as the corpus is designed to be entirely digital, they decided to transcribe texts using Transkribus.

We spoke to team member Dr Ewa Rodek to find out more about this exciting project in the field of Polish linguistics.

Ewa Rodek has always been a fan of languages and their evolution: “I really like the history of language, especially historical lexicography and literary culture.” Luckily for Ewa, she was able to turn her passion into a career at the Institute of Polish Language – Polish Academy of Sciences. Her team is currently working on a digital corpus of Polish texts from the 17th and 18th centuries, the so-called KorBa project. This unique corpus contains Polish texts of many different genres and styles from the Baroque and Enlightenment eras. Once completed, it will contain over 25 million tokens tagged according to their structure and morphology, making it the largest diachronic corpus of this type.

“KorBa is the first diachronic corpus of this size in Polish,” Ewa told us. “Its rich lexis makes it important for the scientific community. But its also important for our team because it is the main material base for the creation of the eSXVII.” The eSXVII is short for the Electronic Dictionary of the 17th- and 18th-century Polish, which the same team has been working on since 2004. “The corpus is integrated with eSXVII in such a way that the user can easily switch from an entry in the dictionary, to a specific search in the corpus, where the user can see how many times the word has been used and in what context.” In short, this project will give researchers much more information about the historical usage of individual words than they previously had.

Historical texts like the ones in this project are not always easy to transcribe. “Our material is not exactly homogenous,” Ewa explained. “The manuscripts often have several different typefaces and even different languages on the same page — Polish coexists with Latin, German or French. Some of the documents also have stains or are damaged.” That’s why, at the start of the project, Ewa’s team chose to transcribe the documents manually. But that wasn’t as successful as they had hoped. “I have been involved in the workflow from the beginning, so I know the problems you encounter using manual transcribers, especially regarding delays. The transcription and proofreading of documents in Gothic script also requires specialist knowledge, which makes it quite expensive.”

The team had already ruled out using OCR technology — “I had a lot of experience with OCR software and I knew that it would not improve our work” — but then Ewa discovered the HTR possibilities of Transkribus. The software would not only make things quicker, but the team were able to use it even though they had no experience in coding or software. “It was particularly important that we could manage the work ourselves and didn’t have to ask our IT colleagues for help. Using Transkribus was also much cheaper than hiring transcribers.”

And thankfully, Ewa did not regret her decision to use Transkribus. The team started by creating their own AI models, and they achieved some pretty impressive character error rates. “The biggest advantage of Transkribus is that it learns very quickly. We developed two models – one for printed texts (with a CER of 0.29%), the other for manuscripts (with a CER of 1.8%),” Ewa explained. And this was despite the various fonts, languages and conditions of the documents: “Transkribus offset these difficulties and handled them very well.”

The fact Transkribus can be used easily by a whole team was also a plus for this large project. “The ability to work in teams, administer models and document collections is very helpful,” Ewa said. “Exporting a pdf file from an image with an underlying text layer is extremely powerful as well. I will definitely use this option in my future projects.”

Ewa’s team might have completed the transcription of the texts, but the KorBa project isn’t quite finished yet. “We have now finished the longest part of the process – that is collecting and transcribing the texts. Now we are preparing the training material for the tagger software and then we have to combine the results of the first and second editions of the project.” It sounds like the team are going to be busy for a while yet!

Thank you to Ewa Rodek and her team from the KorBa project for talking to us!

Before training the model it is important to establish which characters you want to retain and which are just the writer’s spelling mannerisms, particularly if the alphabet in your documents isn’t standardised. For example, the character ÿ appeared in our material. After a while, we realised that this wasn’t a ligature from the combination of the letters ij, but was used interchangeably with the letter y. Therefore, we stopped marking the character ÿ as a separate letter and transcribed it simply as y. By establishing a list of characters like this, you can avoid errors in the Ground Truth and so create a more accurate transcription.